I was running backwards, my dear. That's what I should have said.

I may not have a sufficient answer for my wife, but I do have a lesson for you. Don’t ever, never, not even if a little man in green promises a pot of gold, backpedal across the infield. Turn and run and sneak a peak over your shoulder —  but run forward. 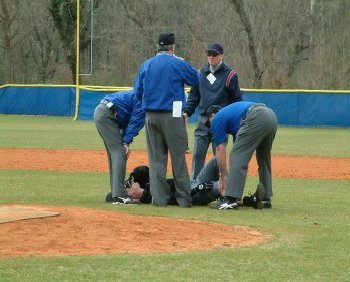 This is what happens when you backpedal across the infield.  Taken at Marist HS inAtlanta. That's me lying on the ground. Surrounding the backpedlar are: Standing – Dick Bensinger fromArkansas in the dark blue and Jerry Crawford in light blue.  Bent over my head is Paul Nauert and standing over my leg is Tony Thompson.

Brian Hale spearheaded the instruction for base mechanics. The Professional Baseball Umpire’s Corporation (PBUC) teaches two-man mechanics that are slightly different from the CCA mechanics that our association uses, but that presented no problems. Paul and Brian brought the same intensity and motivation to mechanics that they brought to the rules.

Base mechanics focused on two methods of instruction: (1) chalk talk, or skull sessions, using a dry-erase board, and (2) fungo drills.

Chalk talk was executed exactly as it sounds. Paul and Brian use a big white board, with a field printed onto the board, and draw out situations. First and foremost, the first determination an umpire must make is if the ball is fair or foul. Using the OBR definition of when a batted ball becomes fair or foul, the instructors began their instruction in the mechanics and responsibilities of the umpires using the two-umpire system. You won’t find any“Mechanics for the 21st Century” here; it is strictly by the book instruction as taught by the PBUC. Nor will you find any “A position, B position or C position” because the PBUC staff does not teach that either. Now I am a simple guy who likes short, concise information. Maybe that is a throw-back to my days as a commander in the Army, but I personally like A and B vs. “the area behind first base” or “the area to the left of the pitcher's mound as you are facing home.” Then again, I am at camp to learn, not to argue. 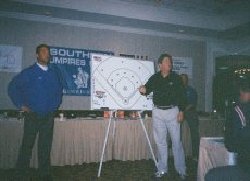 Paul Nauert, MLB #96, and Jerry Crawford, MLB #2, use the white board during a chalk talk session

There was one description that I did like and have carried back to my association. That description is the “working area.” The working area is an area behind the pitcher's mound and in front of the cutout at second base. It is wide enough to encompass both the “B” and the “C” positions. It is labeled the working area because 99.9% of all the field umpire’s work, while in the infield, can be accomplished from that area.

Before we got to situational drills, we spent earlier sessions walking through the mechanics. Of course, what would mechanics be without instruction on calling safes and outs? As expected, we assembled in a box formation and practiced calling safes and outs. One of the most amusing things I have ever seen is 80 or so umpires trying to get into ten rows of eight without being told where to stand. My military mind went into overload from crooked lines and gaggles of sheep. [grin]

Safe calls are a five-step process, starting from the standing set position.

An out call is also done using a five-step process, starting from a standing set:.

Yes, that method can look robotic. But it is the method that was taught, and I was not interested in arguing about the proper mechanic to call safes and outs. After all, I went to camp to learn something.

I have noticed our umpires are using that mechanic during their games, and it looks professional. The umpires in our association will use the appropriate level of emphasis as the bang-bang factor increases, and it looks very crisp.

Come back on 7 April, and I will cover fungo drills and situational baseball.