The Southern Umpires Camp is divided into three areas of instruction: rules, base mechanics, and plate mechanics. Paul Nauert, MLB #96, is the primary instructor for the rules and base mechanics segments. Jerry Crawford, MLB #2, and Richie Garcia, Umpire Supervisor for MLB, were responsible for the plate mechanics.

After check-in on Thursday afternoon, the evening session is focused exclusively on the rules and a walk-through of two-man mechanics, using a dry-erase board. Friday, Saturday and Sunday begin with a morning rules session and practical work during the day. On Friday and Saturday evening after dinner there is another classroom session and a charity auction and charity raffle. Sunday, after completion of the practical work, there is a simple review with the instructors and handing out of certificates and honors.

Rules sessions were nothing less than intense. I constantly found myself pushed by Nauert and Brian Hale, AAA Umpire, to think through the rules. It doesn’t hurt that Hale and Nauert are both instructors at the WendelstedtSchool. Nauert is a class act, and his approach to teaching is motivating and infectious. He has the charisma of an evangelical preacher, and there were several times during the sessions where I caught myself wanting to stand up and yell, “Amen.” 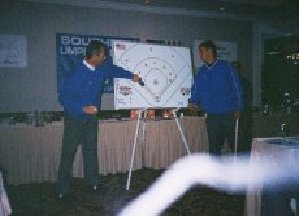 Paul Nauert, MLB #96, left, and Brian Hale, AAA Umpire, right, talk rules during the one of the rules sessions at camp

Paul, from a family of nine children, never called a baseball game before attending the Wendelstedt School the first time.

After being told that he had potential, but failing to get a job, Paul returned home to Kentucky and worked a year of baseball before heading back to school. This time he finished at the top of his class and earned a job in the minors.

For a Kentucky guy like me, from a family of nine and never having called a baseball game, to make it to the Major Leagues is phenomenal. I love teaching even more than umpiring – yes, umpiring, and I want to help others enjoy what I love.

Before the first rules session, Paul and Brian laid out four ground-rules for the clinic. Those ground rules are actually applicable to how we approach our own study as umpires. Those rules:

The first night of rules instruction was short and concise. It set the stage for future rules sessions. We started with the basic rules — but with a twist. Starting with how to play the game of baseball, we covered the five things that are required to start a game.

OBR 1.01 - baseball is a game between two teams of nine players, under the director of a manager...

OBR 4.02 - The players of the home team shall take their defensive positions, the first batter of the visiting team shall take his position in the batter's box, the umpire shall call "Play" and the game shall start.

That was just a starting point for the remaining rules sessions. In the first night we covered: the requirements to put a dead ball in play...a batter is not required - look it up, I dare you. (Hint - OBR 5.11)

Editor's note: That's true — except that many Leagues have made the PBUC manual official, and that dictates the umpire may not make the ball alive unless there is, indeed, a batter in the box. (3.17)

That first evening we also defined the strike zone and a strike, including the "high strike." We talked about how a batter becomes a runner and learned when a run scores. In short, we covered how to play the game. The rules portion of the class was simple: pure baseball, in bite-size pieces.

The camp devoted a portion of the clinic to the whacked-out world of FED baseball. Dr. Robert Swearngin, Executive Director of the Georgia High School Association, taught the 2005 rule changes, interpretations, and points of emphasis. It was obvious that the staff respected Dr. Swearngin, despite his affiliation with the bane of the amateur umpire. (grin)

Editor's note: If Alan thinks the NFHS book is confusing, wait until he gets a load of the NCAA version. (grin)

Aside – Umpires from Georgia were given clinic credit for attending the Southern Umpires Camp. It is pretty cool that the GHSA recognizes the quality of training provided at the Camp; it is a shame that other organizations, such as the Arkansas Officials Association, do not recognize the training as relevant for NFHS umpires. Why? "Because it is taught by professional umpires." GRRRR! Off soapbox.

Dr. Swearngin’s period of instruction was short, which led me to the only change I would recommend for the clinic. It would be beneficial to have arespected FED rules instructor/interpreter at the clinic to assist with the differences in OBR and FED. There were several times when one of the FED umpires would pipe up with “But what about in high school?” or comment that “FED does it this way."

Camp Director Tony Thompson included an NCAA block of instruction, and the instructor was present during most sessions to offer insight/clarification about a difference in the NCAA/OBR rules. Applying the same practice for FED would enhance the training.

Hustle back next Monday, 28 March, when I will cover Paul Nauert’s instruction on base mechanics.