You want to do what?

As President and Chairman of the Board for the Baseball Umpires of Northwest Arkansas, Inc., I set out a number of goals for our organization for 2005. One of those goals was to increase the training level and opportunities for our members. Kevin Causey, AAA umpire and member of our organization, recommended the Southern and International Camps inAtlanta, GA. I did a little research and talked to some other umpires who had attended those camps. I decided that I wanted to make the trek to the Southern Camp in February 2005. But first, I needed to round up some other umpires to go along.

With the incentive that you receive a $100 discount, per person, if you have 10 or more umpires register, I had about one-third of our membership express an interest in going. When it came time to pony up the cash, I had eleven who actually did.

Our band of misfits is a typical cross-section of our organization. We have two Little League/Cal Ripken umpires, seven umpires looking to move up from high school to college, and two umpires just looking to learn. Other than the two LL umpires, all the umpires call high school, American Legion, and Senior Babe Ruth baseball. 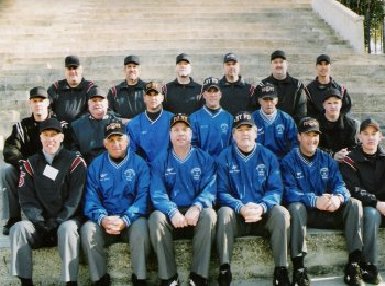 From left to right:

Kent and Jeff Marts are a father-son duo that is attending their first formal training camp. Kent is the editor of our local paper and a long-time LL umpire. Jeff is a sophomore in high school and also works LL ball. Jeff and Kent have the same basic philosophy: help others learn the game. Their method? Learn to be better umpires. Jeff believes that he can help the players learn; Kent sees his role as a teacher and mentor for new umpires.

Dick Bensinger and Brett Pritchard are both experienced umpires looking to get better. Dick recently was a host umpire for a regional Babe Ruth tournament, and Brett was selected to work the Senior Babe Ruth State Tournament. Dick has 29 years of experience, Brett has four, and both are far better umpires than they believe.

The remaining seven are all umpires who want to move into the college ranks. For us, that means an evaluation at the Junior College level, then a schedule of Ju-Co games. As you prove your mettle, you have the opportunity to advance into NAIA, NCAA Division II, and non-conference Division I games. Those umpires — myself, Brian Preece, Jason Bertschy, Allen Turner, Ross Stinchcomb, Craig Depew — all understand that for us to advance, we must get additional training.

Have you ever heard the phrase: "Getting there is half the fun"? Seven of us loaded into a rental van and drove the 750 or so miles from Fayetteville,Arkansas, to Atlanta. Leaving at 6:00 PM we planned on driving all night with the hopes of arriving at the hotel, sweet-talking our way into our rooms, and crashing for a few hours of sleep before camp started at 3:00 PM.

Turner and Preece are on the board of directors with me, and we spent a good portion of the night talking about the way ahead for our association.We, like other organizations, struggle with recruiting and retaining umpires. It is amazing the "bright" ideas one can come up with when delirious with exhaustion.

I did learn one interesting thing: Only two kinds of people are on the road between 2 and 4 a.m., truckers and freaks.

Editor's note: Alan is following orders, which were: Take your laptop and write the pieces as you go. Look for Part II on 21 March.